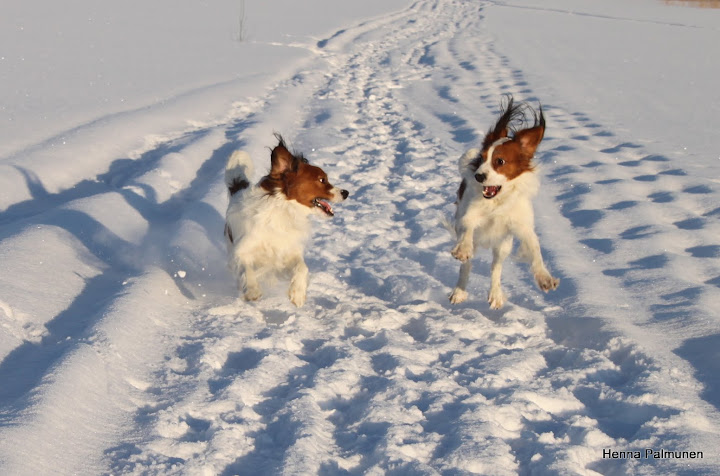 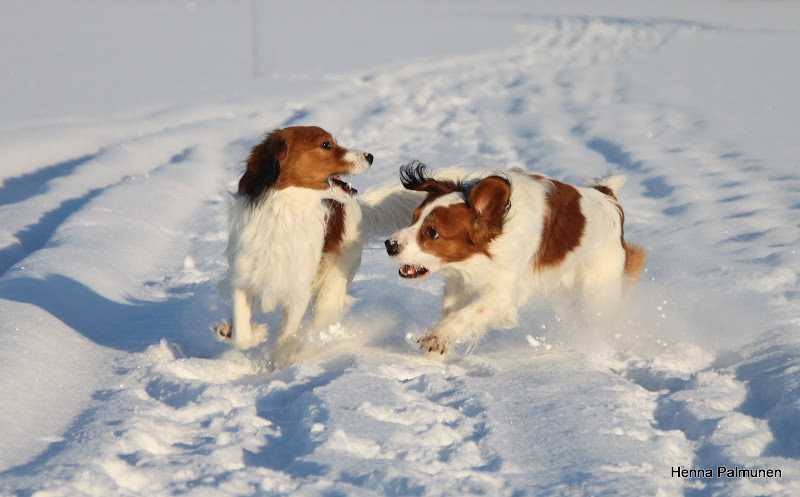 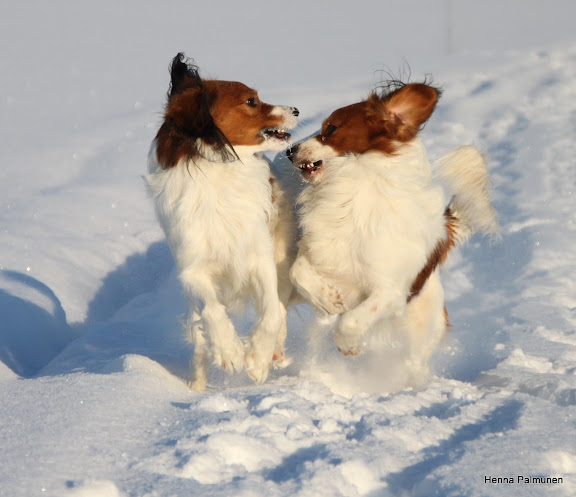 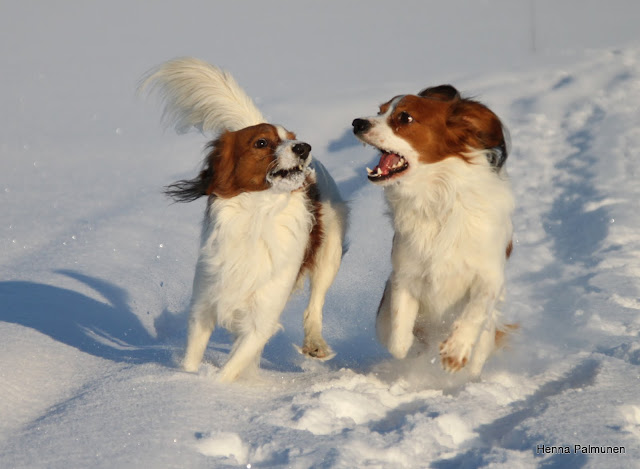 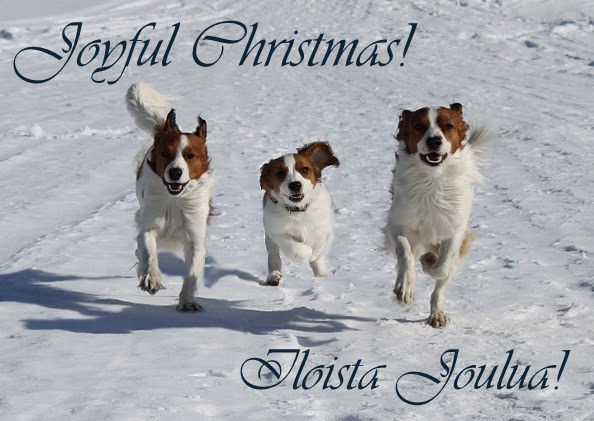 Towards the end of this year...

Oh dear, who has been the laziest blogger ever? Probably me I assume...

Life has been busy even though I have been on a studyleave this year, and mainly at home with the dogs, doing my dissertation. So we have had plenty of time for activities and funtime. The most important canine-event of this year must have been our big trip to Holland, to paragility world championships. We travelled with our good travel-buddy Liisa and her kooikermale Kelmi (Milfeddyg Innemend Elaika) and also her kooikerbitch Etta (Frisian Gem Beatrix Potter). The trip was very long, first I drove three hours at Liisa's from my hometown, and after that another three hours to the ferry. Then the route took us via Sweden, Denmark, Germany and finally to the Netherlands. The travel went surprisingly well, even though Etta was at her heatpeak, and boys were naturally really keen on her. After long drive, and a night in Germany we arrived a cert-show in Leeuwarden, which Etta and Kelmy participated in. They both did very well, Etta was BOB junior and Kelmi ended being the BOB and BOB veteran, and received his Dutch cert. Yet we had to leave early, so he couldn't attend the big ring this time. However we were really excited and happy about Kelmi's result.

The paragility was located at Nijmegen, and we had a wery cozy and nice hotel, among many other agilitycompetitors. So there were several dogs and owners around. The sportplace was very nice sportshall, and the competition was very well organised. We had three days of competitions, and there were four Finns enrolled at paragi, altogether seven dogs on us. The athmosphere was incredible, open, full of joy. Many competitors had severe limtations, and yet they just belonged there, and the tracks were so touching and full of emotions. Something very special indeed, and eventually the results were also very good. My boys behaved and obeyed well and seemd to have much fun on the way. Pre was able to do one track without faults and within the time. Shanti did all three that way, and ended being the 2nd in the cup. I am very happy and proud of that, yet the main thing was anyway the possibility to attend such an event, just a big dream come true for me. Very good results for other Finns too, Veli-Pekka Suuronen won with his Ella, and Anne Juntunen became 2nd at her cup with her Miro. Congratulations once again, and thank you Finnish Agility Association for supporting us!

We were able to meet some kooikerlovers on our way, in Holland we met Frodo's daughter Phybie and her owner Maren from Germany, and also her breeder Susanne from the kennel Youngmuskyteira. 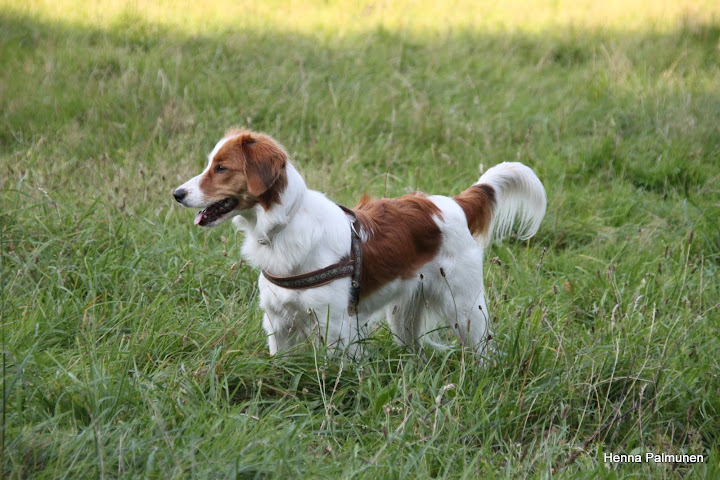 Susanne had her friend and one of her bitch Quinta along. Further they had a great male Aldwin, a 16-year old kooiker with such a great temperament and health. I was astonished. I hope my boys will live as long and healthy as Aldwin. 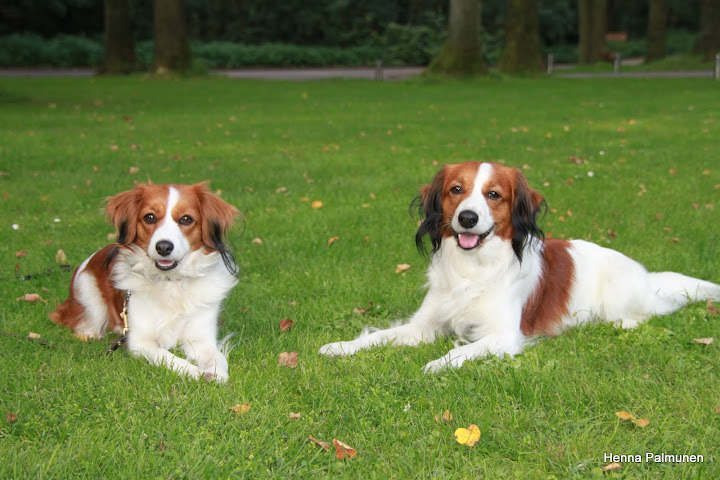 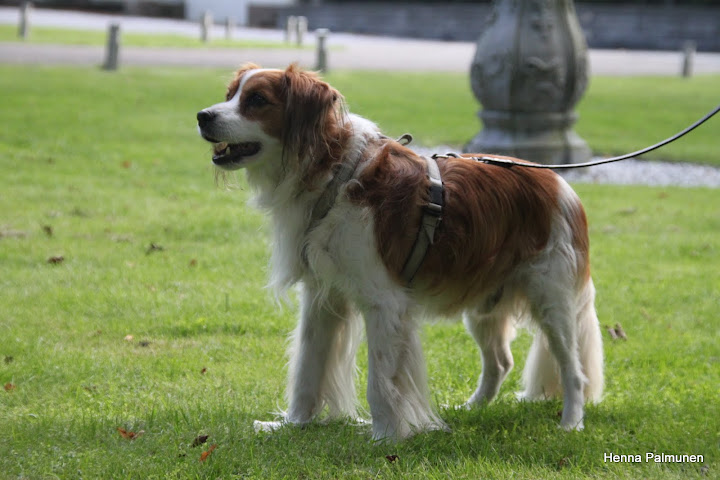 
On our way back to Finland we met briefly Preety's breeder Yvonne and Pre's sister Zally with her owner Pia. They were on their way to mate Zally at the south of Sweden. That mating resulted a large litter so congratulations Pia and Yvonne. That was the first litter at Kennel Miltassias. Surely a good, devoted breeder and loving, warm beginning for the litter. We then drove to Preety's mum and her owners, and we got to spend nice time with Enya and Christina and Ove. Preety got to play with her mother, and I loved that sight. Enya is such a calm, stable and well-mannered beauty. Thank you once more Christina and Ove for your hospitality and love! 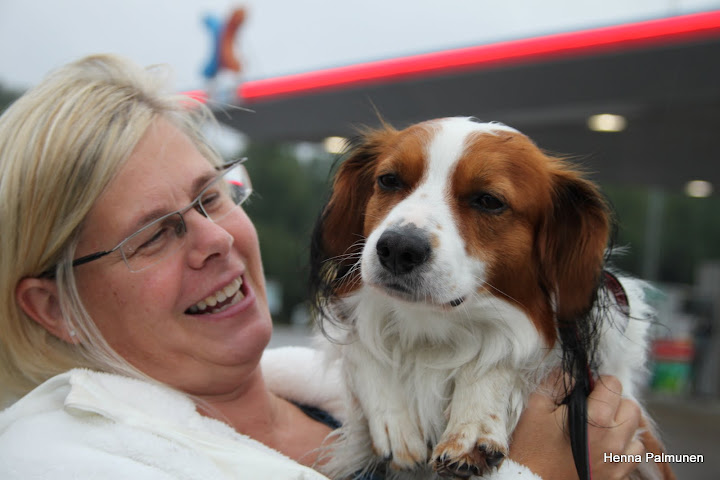 Very tired Preety, opening his ears as a sign of love and devotion to his breeder Yvonne 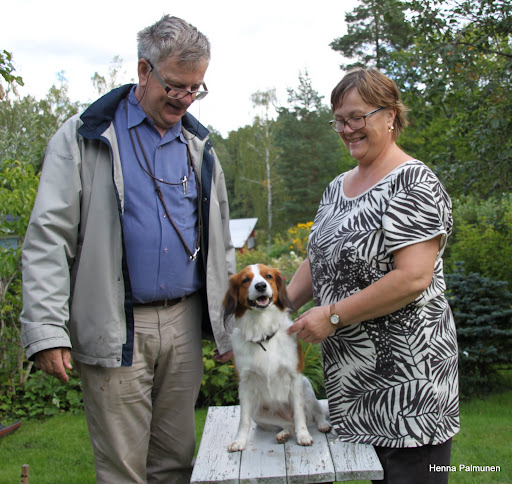 Enya and her owners

I decided to stay at Liisa's place in Finland for one extra day once we returned, since the travel was long and tireing, even though Liisa did most of the work. It was so nice just to recap the whole trip, all the experiences and new friends we found. Oh dear, what an experience of a lifetime. Still cherising the moments in my heart. 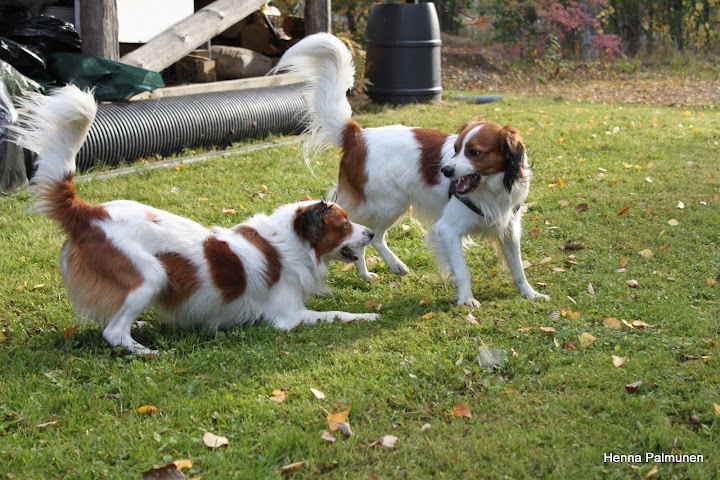 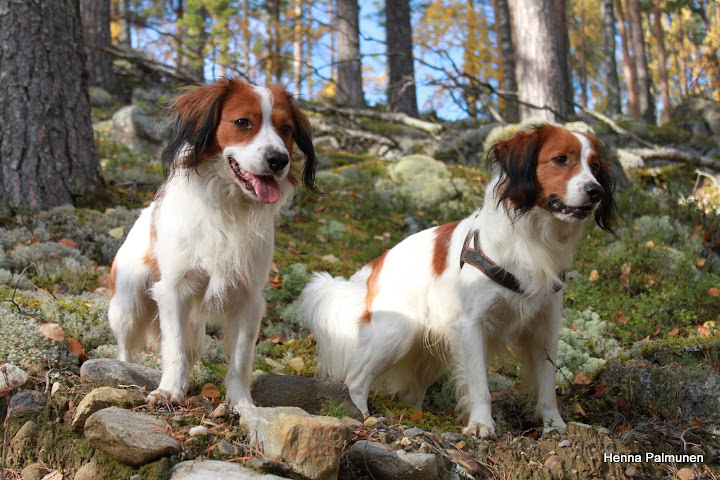 Boys got to rest at home for a few days after such a big trip and then we raced again to the agilitycompetitions. We had fun, I think no results that time. Unfortunate event happened, when I fell down and twisted my healthy ankle. It stayed very sore for over a month, that make walking difficult. Luckily I was able to get so much help from my friends. Then after a week we had the full weekend of agilitystarts, and finally happened something amazing. Shanti was able to race a zero-track within the desired time at the class three. I was astonished, such a great performance from him, and he demonstrated that we can actually make it even at the most demanding class. My hopes this far with him has been just to get clear run, without mistakes, but I never thought we could make it within the given time. I am so happy and proud of my talented boys.

We also made a short trip to Sweden with my Shanti, hoping for a puppies to our neighbourcountry from him, but unfortunately not succeeded this time. Yet it was sweet to meet friends and spend some quality time. Shanti is indeed a great and reliable buddy to travel with, the easiest dog on this universe. Immediately after the trip we attended a breeding advicor meeting organised by the Finnish Kennelclub. The topic was interesting, atophy, allergy and auto-immune-related diseases on dogs. Highly important issue also on kooikerhondje, and I learned several things from that meeting. Another intersting course organised by the Finnish Kennelclub, was the breeder's course 2, which I also attended. The days were packed with very interesting topics, such as breeding ethics, health concerns, taxation and litter-planning.

We have attended few shows, Adya has had her debyt, and succeeded so well. At the spaniel club show she won the junior class and became eventually the 3rd best female with Ck. Shanti got excellent that time but not more. Last weekend we had the winner-show at Helsinki. Adya was amazing, and eventually won the junior class, become 2nd best female and received her first cert. Anniina handled Adya so well and professionally and I was so delighted to see their connection and trust to eachother. Adya is a wonderful, open, tough and social kooikerbitch, everything and more Anniina and myself wished from our dog. Boys love her to bits, and even Shanti has decided that she is worthy of a play (Shanti refuced to play with her for a long time). Such a nice trio I have! 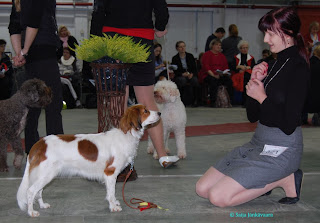 Adya and Anniina at the spaniel clubshow, photographed by Saija Jänkävaara

Preety has gained some zeros from agility, and I am so proud of his development. This term we decided to focus on his motivation and enahcing it. It has worked out beutifully and he has now completely different touch to his tracks, he has build self-esteem and enjoys his training and competing so much. I love my smallteam, packed with great, fun people. We have learned a lot and it is always a joy to go to training. Further, our agilityclub is building a big hall, and we have been working there as much as possible. It is rewarding to build something so important, and also interesting to figure out some hidden skills in oneself...

Next agilitycompetitions will be maybe after a few months, since we will rhttp://www.blogger.com/img/blank.gifest and just train the coldest months of the year. Shows boys are probably not attending next year, or perhaps clubshow or somewhere abroad. We will just support Adya and see how she begins her showcareer. She will probably have several shows at the beginning of next year, since there are a good few smaller groupshows around here. Hopes for obedience are there, since I would like to proceed in it, especially with Preety.

One importat thing I needed to say. We are doing a kooikerhondje DLA-research, and this far already 8 haplotypes has been found on kooikers. Blood donations are welcomed, and hopefully as many kooikerowners could do that, even from abroad! And here are the results this far:

But now I need to wish you all very good December and approaching Christmas. Sorry for not updating this so long, but hopefully more active next year. New Year's resulation :)
Lähettänyt Henna klo 10.04 Ei kommentteja: