Oh, what a trip behind. Such a great fortune to have a dog from lovely Sweden, and further, from a devoted, active breeder. We had a great one-week-holiday in our neighbour-country, this time it was only Preety along. Together with us were the bestest travel-buddies Liisa (kennel Milfeddyg) and Kelmi (Milfeddyg Innemend Elaika). First and foremost, deep thanks to Liisa and Kelmi for making this trip as great as it was. The best holiday ever! 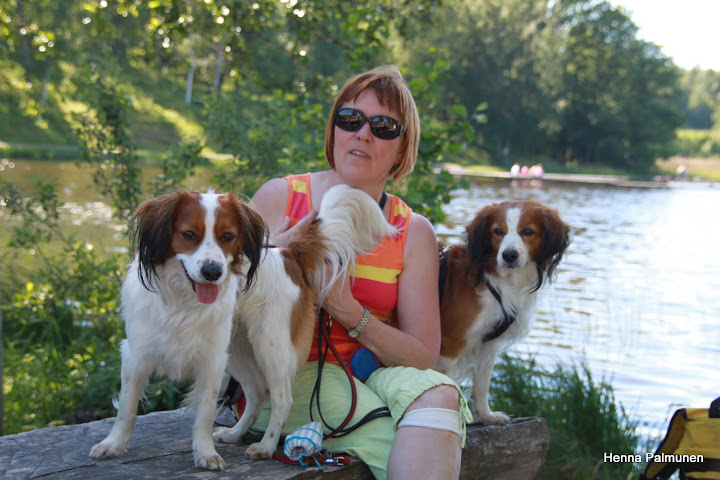 Liisa and our boys

Even though Kelmi is a kooi-male, there were not a single problem between our boys. They got on perfectly, didn't stare, didn't show off at all. They were friendly and happy towards eachother during the whole trip. At the beginning we separated them with a puppy-fence, but eventually after many incidences we ended sleeping at the carbooth, all 4 of us, side-by-side. After that Preety probably thought that Kelmi is a replacement of Shanti, a great idol of all times, and Pre wanted to kiss Kelmi's lips all the time. Kelmi was bit puzzled about that movement, probably wondered what on earth is going on in that little boy's mind :)After the close sleep, boys got to run free together, and they were very relaxed during the whole rest of the trip, even though it must have been bit overly active and slightly stressful for both of them. They handled their nerves perfectly, and we got to be very proud of our boys.

The ferry-trip went on fine, Kelmi was more at ease to use the "restroom" (i.e. sandbox) at the deck of the ferry. Preety was on the opinion that it is not worth of his pee, and decided not to do anything at all. Liisa joked that if we will travel to Germany at the fall, as we plan now, she needs to take catheter along for Pre. That might actually become even handy, so please Liisa do! Once arriving Stockholm we soon realised that it was so called "long weekend" and we were definetely not the only ones aiming to the countryside from the capital. So we were stuck in the traffic jam for 2,5 hours, but luckily, so were all the rest attenders of Mattssons kennelmeeting at Malmköping. So meeting was bit postponed and we eventually weren't late at all from the beginning.

It was so many people, so many kooikers! Unreal - 27 dogs attending, most accompanied by 2 people. I was so delighted to meet everybody.

Especially heart-warming was to meet Preety's beautiful, sweet, wonderful, calm and friendly mother Enya (Mattssons Enya-Adriana) whom I fell completely for again! We took some great pics of mother and son, and those two got on very well. Preety was also so happy to meet his breeder Yvonne, and Yvonne's husband Ted and daughter Ting. Preety went completely out of his mind, especially when he met his most beloved friend Ting. I had tears in my eyes when I saw that. The ties are so strong between Preety and his breeder's family. Thank you for that!!! 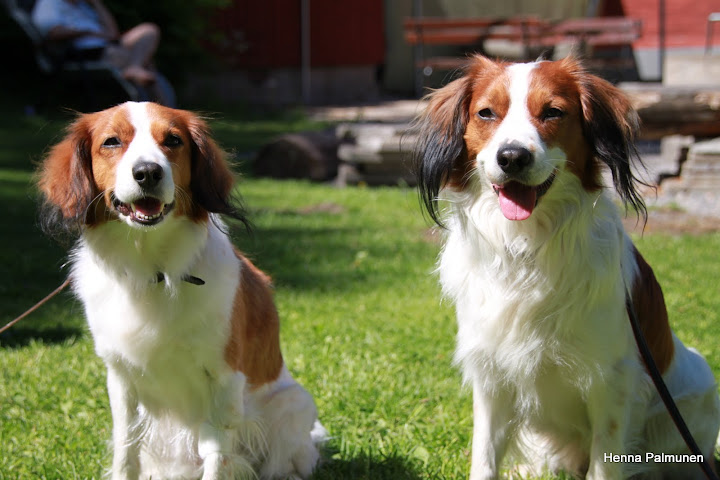 Liisa was also delighted in what she saw at Kelmi's offsprang. They all were so nice looking and well tempered, lovely dogs indeed. Pre got to play wiht his sister Zally, and their plays just matched eachother so well. We also got to meet Pre's brother Zaky, the male I have just seen as a pup. Brothers didn't appreciate eachother's company, so they didn't get to greet that well.

We did a bit of training and loads of talking and walking at the beautiful campingsite of Malmköping. If you ever plan a trip in Sweden, this campingsite is highly recommended! Beautiful, friendly and spacious with very good beach and large green fields.

We stayed at the campingsite untill Saturday morning, when we left for nat show at Norrköping. It all went as we wished for, and Kelmi was crowned at the end of the day as bob and Se ch. Congratulations!!! 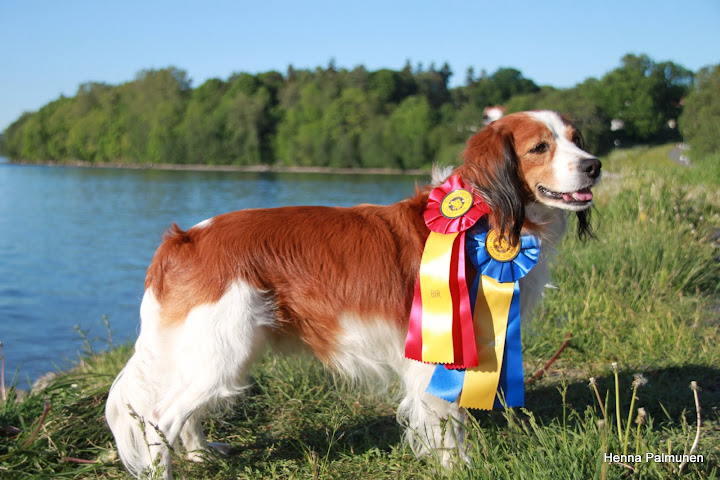 Preety got to be best male 2 with excellent judgement. We both liked the judge, Dan Erickson, very much. He did precise work, was open, friendly and very devoted to his work. We also got to meet some swedish kooikers, such as Fayza's close relative "Tilla" from Cirtaps, Ayax from Wenarja's (Frodo's grandson) and last but not least, lovely pup, Vicke and the from Lovemix that was actually Preety brother Ymer's son! What a determined, ready-looking half-year-old! 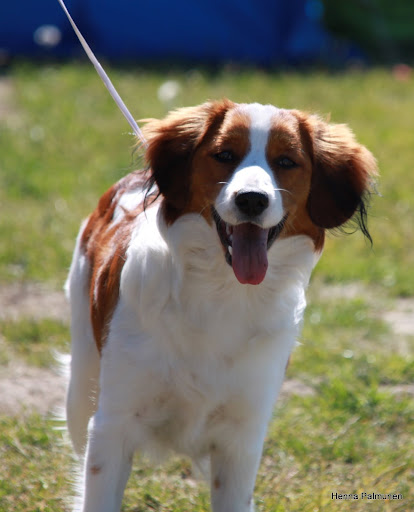 Between this show and next day's Vänersborg INT was over 500 km and eventually hot day. When we arrived near Vänersborg it become clear that there were a) no open hostels b) fully booked hostels and c) not dog friendly hostels. We toured around for a good few hours, and eventually had to sleep in the car. We had joked about it, but when it become reality it wasn't that funny... untill we had fixed the sleepingplaces and fell down hysterically laughing. It was so funny, and absolutely the best athmosphere ever at our accommodation. And boys were such darlings, sleeping at our feet, side-by-side. 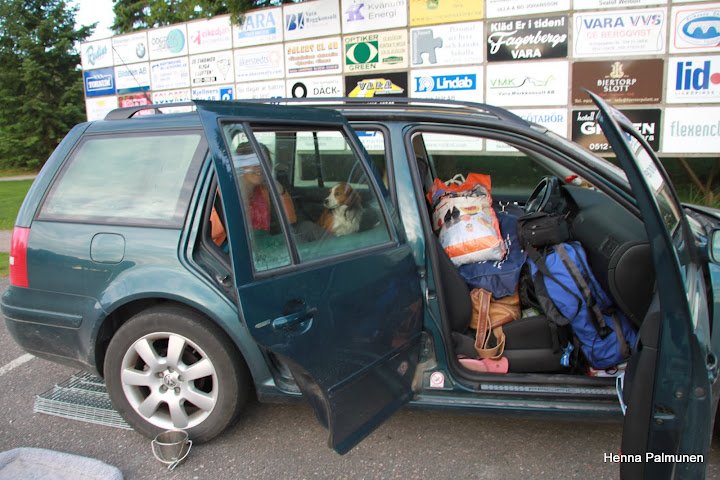 After few hours' of sleep we continued the rest of the trip towards Vänersborg. There were several dogs enrolled, so my hopes for Preety's cacib were very small. Nevertheless HE DID IT! And at the end of the show Preety was Bob and got the much needed cacib. I was so delighted, surprised and happy! And naturally very proud of my sweet little boy, he presented himself so well, self-securely and was happy and open all during the show. Good for you Pre! We also got tomeet some relatives such as uncle Yesper and cousin Jimmy. Further we got to talk Moonhaven breeder and naturally with Uffe and Isla's owner Jonna, that was there too, after very successfull Norway-tour. Isla was BOS, so gongrats once again to Jonna! Judge was Skaar Torbjörn, very friendly and handled the dogs well. Apparently he is into kooikers a bit, so gaining price from him was a great achvievement from Preety.

Here are the attenders and results (in Finnish style) as copied from our forum: 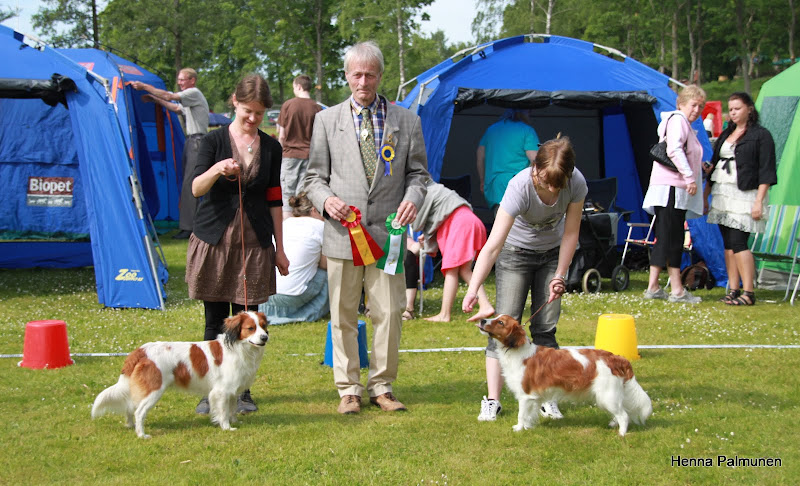 We didn't stay for the finals at Vänersborg, as nice as it would had been. We aimed back the long trip towards Stockholm to spend a night at Pia's place. So Preety got to play much with his sister Zally, and we got to talk about kooikers all night long. 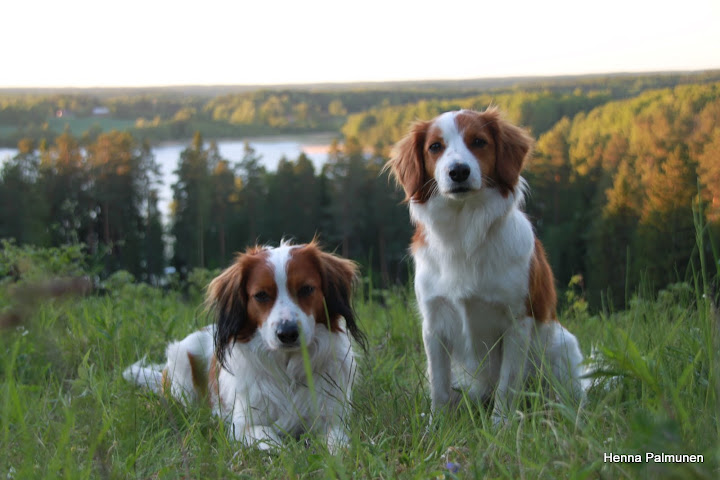 Next morning we headed to agilityfield, where Yvonne and the rest of the gang joined as well. Unfortunately it was bit too hot for good training, but we managed to do a bit and dogs loved it anyway. After that it was lunchtime at Yvonne's and Preety got to be reunited with his old gang (with several new members). All went on fine, and soon it was time to go towards the ferry.

The trip back was as good as the trip towards Sweden, dogs were just fine, and got to be free at the cabin, no problems. It was nice to return home, yet we had so much fun, laughed so much and shared so many lovely moments, that warm my heart deeply. So it was also bit sad that the great holiday was behing. Yet meeting Shanti and Adya was so full of love, that I am glad to be back again, with my own gang.

Hopefully we will get to have the planned trip with Kelmi and Liisa at the fall. We'll see. Many other things have happened during the last week, including Adya's match show (where, unfortunately I was judging, so she didn't get a placement this time), Shanti, Preety, Adi and Tico training agility, and also Hilppa, Shanti and Preety training agility. Took some pics of this too, and will upload them later.

Have a nice summer everybody!!!
Lähettänyt Henna klo 9.38