We have had lovely, active but relaxed holidayweek behind us. We have just been doing activities, meeting and visiting friends and calming down at home. Today we spent my birthdaymorning with my family, five of them came for a visit. Boys loved the visitors, and toured around people, getting strokes and cuddles. After that it was the time to drive over at nearby woods, and meet up with lovely Manta (Cavalriina's U). We haven't seen her since Christmas, because she has been on a heat. We knew already, that Shanti will be head over heels after her, since he just loves her smell so much, even when she is on false-pregnancy. Pre took it calmer, and toured mainly around the woods. This time Manta wasn't so interested on playing, she was very into finding treats that army had left behind from their camp in the area. Here you can see some pics from today.
Manta and Pre posing so well together: 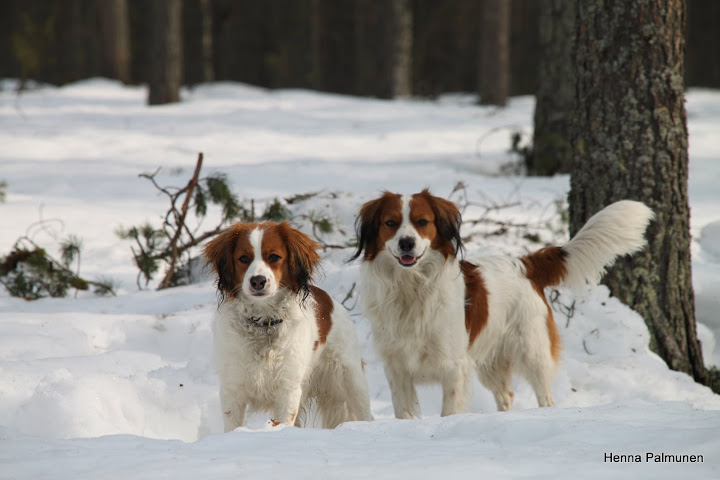 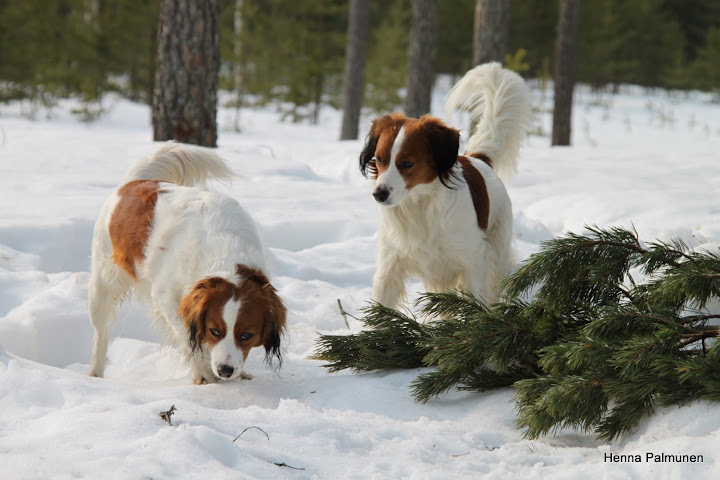 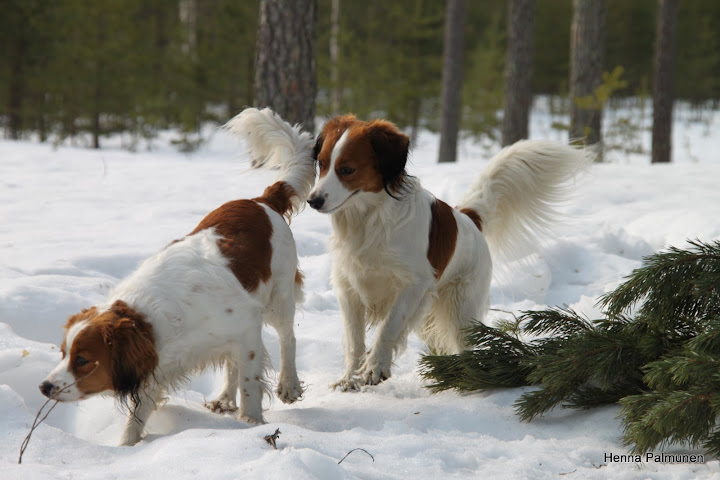 Pre looking puzzled on what is going on: 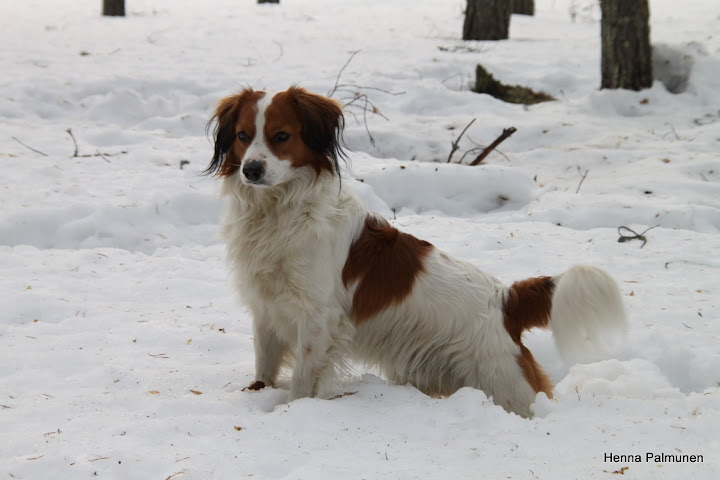 Manta is more keen on this can than my boys: 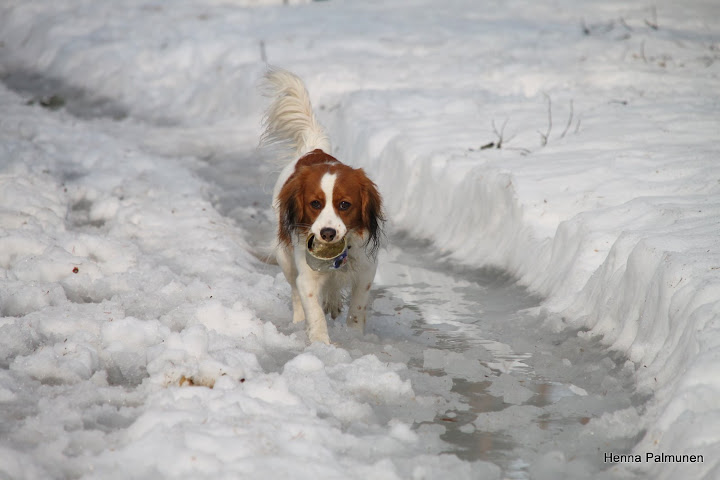 Finally we ended up getting one nice face-pose of lovely Manta: 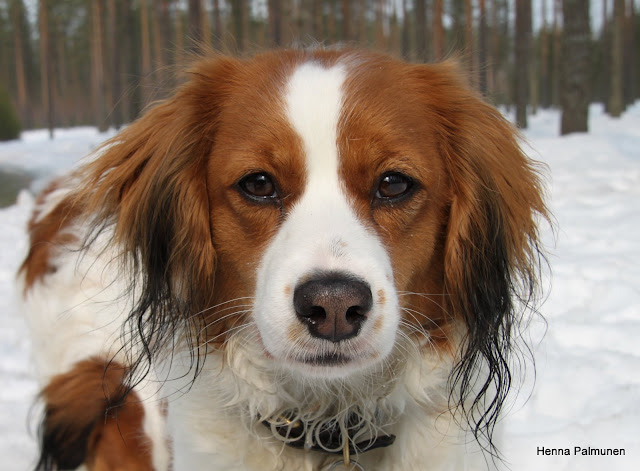 What else we have done over the week is agi-obedience-agi-obedience-agi... It has been great possibility to drive to the agilityhall, do some smaller tracks and some obedience. One day we were there with my lovely friend and her son, my godson of 6 months. Pre has become so keen over him, because he has learned that this little boy beolongs to the hall, this cool mother, and further, she has these two lovely poodle-bitches Pre loves. What a handy way to habituate Pre to babies. On the other day we also had some sweet baby-company at the hall, since Katri was with her 6 week old daughter and her kooiker Hilppa (Bullbenz Kooi O) at the hall. Later on came also Kati with Tico (Milfeddyg M) and Kaisa with Ella (Lentävän Luppakorvan L). So some serious kooi-agility. Oh dear, I nearly forgot, we also got to meet Shanti's bride Beta (Estaika's C) and their daughter Pimu (Estaika's B). Naturally we took several pictures of the family together, and lovely mini-sized Pimu. That time we had Hilppa on us, since we took her to the showring just before meeting with Beta and Pimu.

Shanti and Beta's beautiful daughter Pimu, who has fully inherited his father's speed and activitylevel: 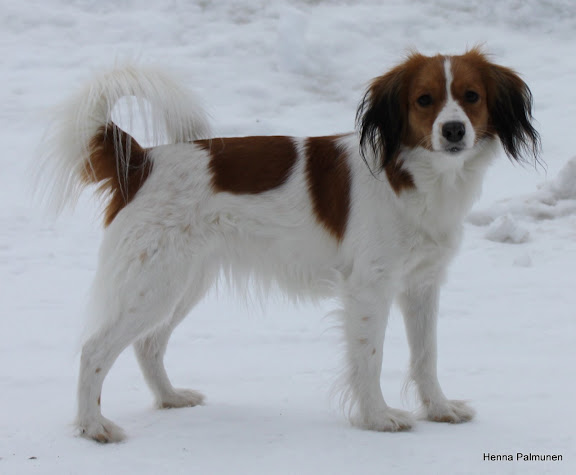 In the end Preety and Hilppa got to play together with full speed: 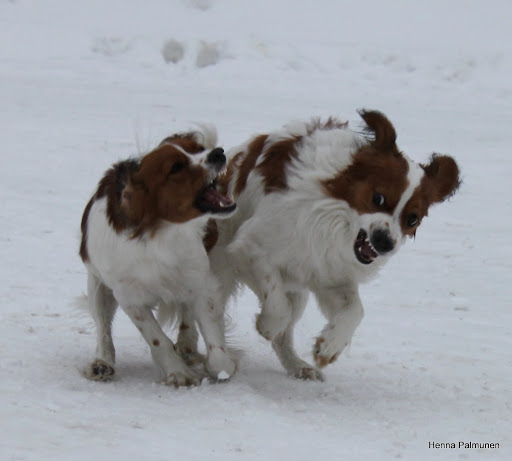 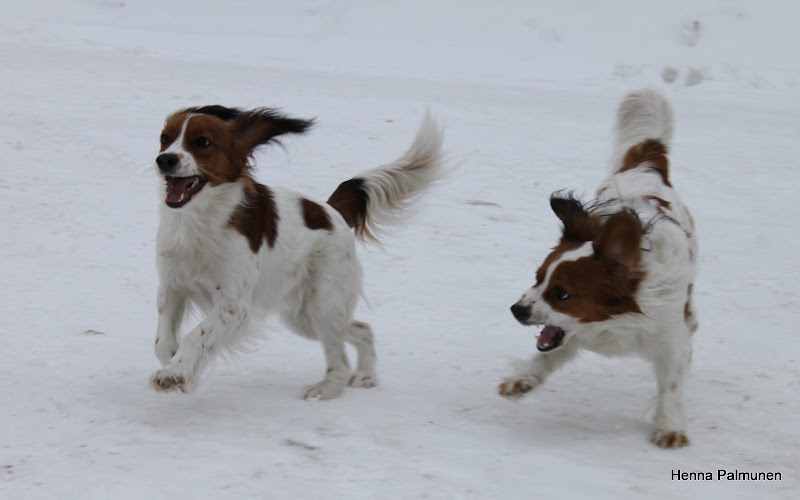 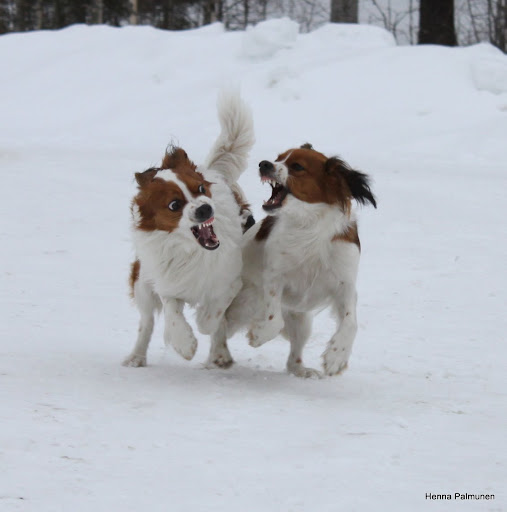 We have also been getting private guiding on our obediencetraining, which has been so intersting. Thank you Reija so much! Tomorrow we have another intersting kooikerday, when Shanti's halfbrother (Callitris H) and Fayza (Royal Fayza v.Dyjadin) come for a visit and agilitytraining together. Later on also Kati with Tico and Kaisa with Ella will join us. What a lovely easter!
Lähettänyt Henna klo 8.10